Thanks to best sellers like Jonathan Kozol’s now-classic Savage Inequalities (1991), many Americans are aware of the need to reduce funding disparities in public education, particularly the resource gaps that divide wealthy suburban districts from the sorts of struggling urban school systems profiled in Kozol’s work. Less often discussed, though, is the plight of rural districts, which also tend to lag far behind in per-pupil spending and other measures of resource equity.

According to the U.S. Census Bureau, one in five Americans lives in a rural community, and according to recent research, 64% of rural counties have high levels of child poverty, compared to 47% of urban counties (Schaefer, Mattingly, & Johnson, 2016). To highlight the kinds of school funding shortfalls that are common in such communities, and to explain the challenges involved in helping rural districts to catch up, we focus here on the situation in our home state of Idaho, where, according to the Idaho State Department of Education, around 72% of school districts and charter schools are considered rural.

When we imagine rural settings, many of us see rolling hills, babbling creeks, meadows, riversides, and lakes, a vision that leads us to intuit that rural areas are largely devoid of “big city problems.” One of the most rural U.S. states, Idaho is known as a recreational playground, with the deepest river gorge in North America, abundant ski terrain, relaxing hot springs, and riverside hiking trails. However, these features mask the poverty hiding between the ski slopes and riverbanks. Few realize that Idaho, like many such rural states, has a high rate of poverty and faces significant inequities in school funding.

While the news media often report on the challenges associated with concentrated poverty in cities like Detroit, Chicago, and Newark, state-level poverty rates are highest in the south and west — topping the list are Mississippi, Louisiana, New Mexico, Kentucky, West Virginia, Oklahoma, and Arizona (Hansen, 2018). Further, the most common measure of school and district-level poverty, free and reduced-price lunch program enrollments, likely conceals the true extent of poverty levels in many western states, where a long–standing cultural emphasis on self-reliance may result in under-enrollment in such programs. This requires us to look at additional measures to get a more complete picture.

For example, with a median household income of $21.78 per hour, Idaho families earn about $3 per hour less than is necessary to sustain one parent and two children (Henry & Fredrickson, 2014). The Idaho Department of Labor reports that fully half of districts within the state, almost all of which are in rural areas, have higher student poverty rates than the national rate. Overall, Idaho ranks near the midpoint of states in terms of median household income, but the more populated and tourist-heavy areas raise the average and mask the state’s rural poverty (Statistical Atlas, 2019).

We understand that not everybody agrees on how much money matters in K-12 education. For example, in her Senate confirmation hearings, Secretary of Education Betsy DeVos made it clear that she “sees no connection between school funding and school performance,” citing an Obama-era grant program that showed no demonstrable effect on student achievement (Lattimore, 2017). Most scholars, however, hold that spending levels can and often do matter to educational outcomes (Carey & Harris, 2016; Driessen, 2017; Dynarski, 2017). In particular, the research on teacher quality strongly suggests that students tend to benefit from attending schools with higher teacher salaries (Hacker, 1991; Leigh, 2012) and perform at lower levels when they attend schools with lower teacher salaries (Clotfelter, Ladd, & Vigdor, 2010; Hanushek, Kain, & Rivkin, 1999; Ordway, 2018).

Overall, Idaho trails behind most other states on measures of educational equity and performance, including per pupil spending and high school graduation rates (Hansen, 2018; Stebbins & Frohlich, 2018). At $48,113, its average teacher salary ranks on the low end of the national range, too (Richert, 2018). Further, and as in many other states, particularly rural states, the disparity between districts is significant in Idaho — for example, new teachers in wealthy Blaine County earn 60% more than the state average, while those in tiny Pleasant Valley earn 29% less than the average. Idaho also has a serious teacher shortage, worsened by a recent 25% decline in applications to teacher preparation programs (Linder & McHugh, 2017). And while some new teachers choose to work in the relatively well-paid Boise area, large numbers — including 40% of those prepared at the University of Idaho’s teacher education program — cross the state line to teach in Washington, where they can earn $8,000-$10,000 more in starting salary.

While teacher salaries are low in most rural states and regions, especially in the West (Efflandt, 2017; Osher, 2019), Idaho’s salaries are currently the lowest in the United States (Bauer et al., 2018). To address its teacher shortages, the state has launched an effort to increase starting salaries in a phased-in approach spanning five years. So far, though, this has done little to retain more experienced educators, possibly because while minimum starting salaries in Idaho jumped 19% (from $31,000 to $37,000), beginning teachers in Washington enjoyed a 29% average increase (from $34,048 to $44,216) over the same period, from 2014 through 2019.While Washington’s rise saw ripple effects for those in the middle of the salary schedule, Idaho’s veteran educators did not benefit from such an outcome.

Moreover, the disincentive to teach in poor, rural districts goes well beyond salary levels — working conditions matter, too. As a prospective teacher candidate recently explained to us, she hoped to work in a high-needs school, despite a low starting salary and a long commute, but when she went for a job interview, she was put off by the ways in which funding shortages have affected the school’s workplace climate:

I can’t quite put my finger on it, but my gut told me no about working there. The lighting was really dim and the principal said she had saved $31,000 by dimming the lights this past year — which I applaud but maybe that contributed to my gut feeling. . . . I would love to get into [a high funded district]. Maybe one of those jobs will pan out since it is so much closer.

In Idaho, property taxes account for just 25% of school budgets, but given vast differences in local tax bases, that’s enough to create significant funding discrepancies between wealthy and poor districts. More than a dozen years ago, the state attempted to address these gaps by shifting much of the tax burden from property owners to consumers — in 2006, the Idaho legislature reduced by $260 million the amount of school funding paid for by local property taxes and, to make up the difference, increased the state sales tax from 5% to 6%. Ideally, that 1% increase would be more than enough to offset the reduction in local funding. In reality, however, it wasn’t sufficient. By shifting from an emphasis on local school funding to a reliance on sales tax generated by Idaho’s handful of relatively wealthy cities and vacation destinations, the state hoped to level the playing field for poor districts. For 18 of the state’s rural school districts, though, that strategy led to budget cuts.

Then came the Great Recession of 2008 and the problem was compounded, as sales tax receipts declined with the economy and school districts turned to local supplemental levies to make up the difference (see Figure 1). Naturally, some voters came out against funding these levies, as this would effectively return the property tax burden the state had recently relieved, while maintaining the increased state sales tax during an economic downturn. Consequently, schools in poor rural communities suffered even further teacher shortages and funding shortfalls. Of the 18 school districts that lost state funds as a result of the 2006 legislation, only 11 have managed to successfully pass a supplemental levy. (Further, many have moved to a four-day school week to cut costs.) 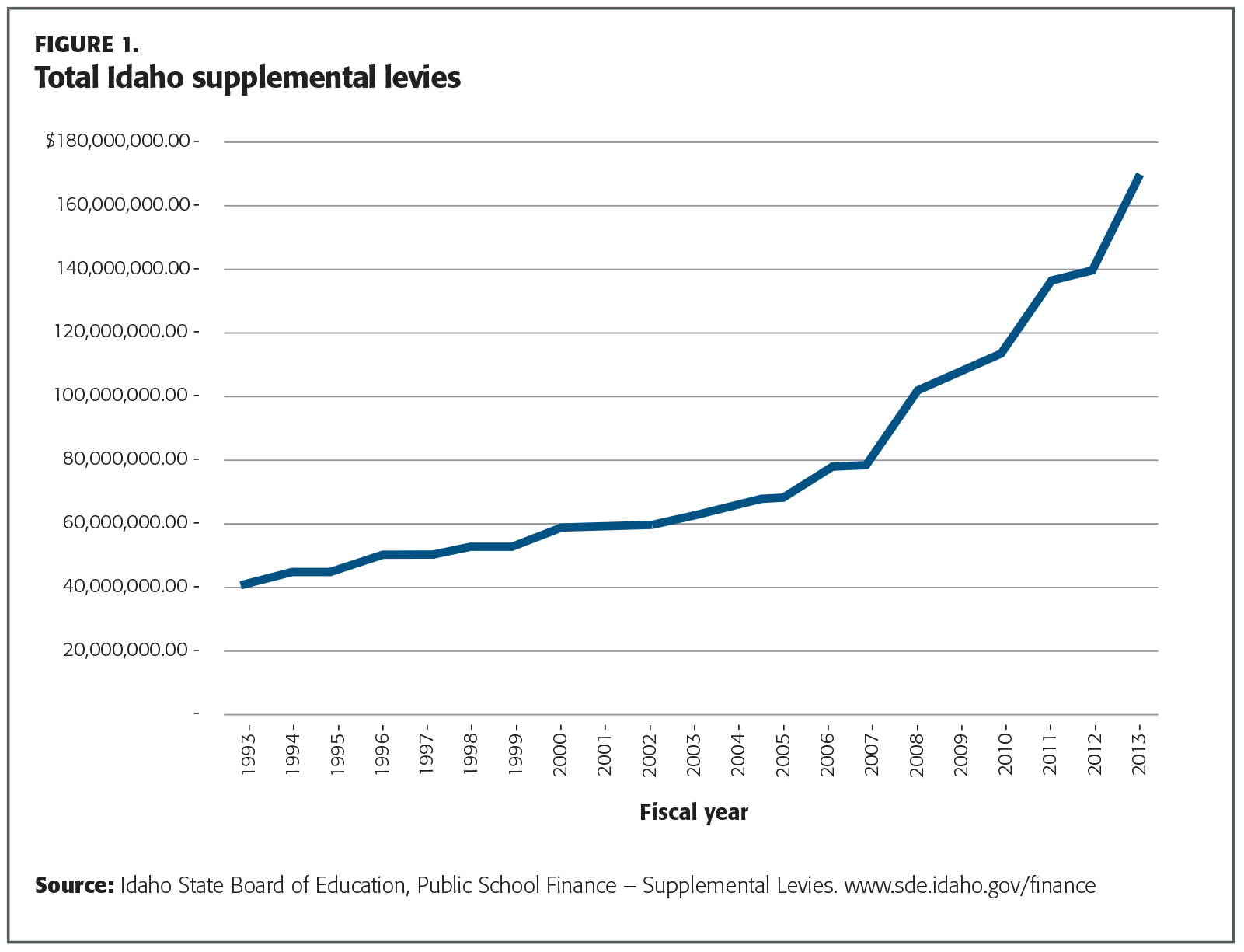